Recent years have seen our state subjected to a series of unprecedented extreme weather events, and this is being accompanied by an escalation in climate protests that are increasingly targeting the profits of the fossil fuel industry, as well as raising public awareness to the crisis.

This was seen over the last week with Blockade Australia carrying out eight successful disruptive actions, using bridges to block rail access routes to Port Botany: the nation’s largest seaport.

The response from the NSW Coalition has been the regular: apply tougher sanctions to protesters.

This process was immediately commenced by NSW metropolitan roads minister Natalie Ward, who amended a pre-existing law via the delegated legislative process, which avoids the necessity of putting a reform to a parliamentary vote.

The amendment saw clause 48A inserted into the Roads Regulation 2018 (NSW), so that the offence under section 144G of the Roads Act 1993 (NSW) now applies to obstructing any bridges and tunnels in Greater Sydney. This crime carries a maximum of 2 years imprisonment and/or a $22,000 fine.

And according to the NSW government press release, this is only the beginning, as it’s going to draft a new piece of legislation that will extend these draconian penalties to the obstruction of roads, as well as industrial and transport facilities.

Yet, until very recently, such extreme penalties weren’t attached to the democratic right to protest. And rather, what seems to be occurring is a last-ditch attempt by the authorities to curb the rising tide of civil disobedience that’s only just beginning.

The right to protest in NSW is based on the common law right to assembly, which has its basis in the 1215 Magna Carta: a British royal charter of rights.

Common law is the body of law that’s been established by the court rulings of judges, which have set precedents. This is as opposed to statute law, which is established via parliaments voting on pieces of legislation that if passed, contain provisions that become laws.

The right to assembly is also supported in this country by the implied freedom of political communication that the High Court identified exists within the Australian Constitution in two rulings from 1992.

These decisions outlined that as the people directly chose the government of this country, the right to political communication must exist and not be infringed upon.

The right to assembly, however, is not guaranteed under NSW statute law. And laws passed by parliaments always override common law. Therefore, as the state passes further measures to block protests via the statutory process, it’s getting harder to uphold the common law right to protest. 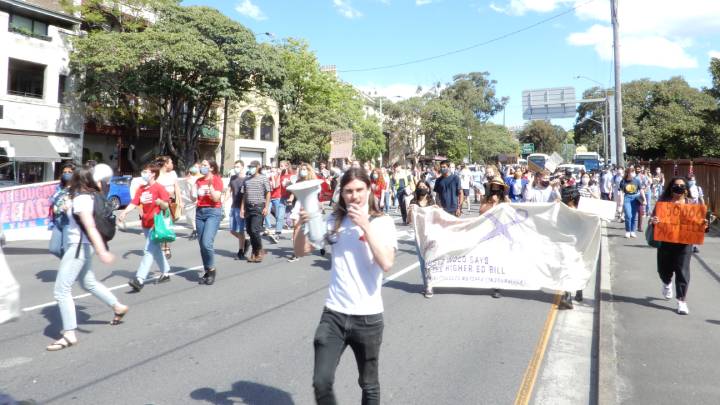 Part 4 of the Summary Offences Act 1988 (NSW) establishes a process whereby a group organising a public assembly or protest can notify the NSW police commissioner of its plans and if there is no opposition to it taking place, then it will go ahead with law enforcement monitoring it.

Section 6 of the Summary Act contains the key protesting offence, which is that of obstructing traffic. It carries a maximum penalty of a $440 fine. But the rumblings from the NSW Coalition last week indicate that it might be making this a much more serious crime under certain circumstances.

Then there’s the crime of using offensive language, contrary to section 4A of the Summary Act. While this continues to be against the law during protests, the police usually turn a blind eye to it.

In 2015, some marriage equality activists were charged with using offensive language during a rally. However, a NSW magistrate dismissed the charges, as he found swearing about a cause was different to targeting an individual with abusive language.

Another summary offence that’s often raised in relation to demonstrations is that of violent disorder under section 11A(1). Carrying up to 6 months inside and/or a $1,100 fine, this crime involves three or more people threatening violence in a manner that would make a reasonable person fearful.

If tensions boil over

There are a number of more serious offences contained within the Crimes Act 1900 (NSW), which are commonly associated with demonstrations that spill over into violence.

These crimes include affray, under section 93C, which is the threat or use of unlawful violence. It carries up to 10 years inside. While section 93B contains the offence of riot, which involves 12 or more people conducting affray. And if convicted, they’re liable to up to 15 years behind bars.

Another key indictable offence those attending demonstrations often get charged with is assaulting, harassing or intimidating a police officer, contrary section 60 of the Crimes Act. It can put a person away for up to 5 years.

And then there’s the crime of interfering with a mine, under section 201 of the Act. This crime carries a draconian 7 years imprisonment. And amendments by the Baird government in 2016 broadened this offence so it now also applies to coal seam gas and petroleum operations.

Then NSW premier Mike Baird told a 2014 mining industry dinner that he was going to commence cracking down on climate defenders. And in March 2016, the Liberal leader delivered on this promise with the passing of his Interference Amendment Bill.

The most extreme law within it was the new offence of aggravated unlawful entry on enclosed land, contained in section 4B of the Inclosed Lands Protections Act 1901 (NSW).

This crime involves trespassing in an attempt to interfere with business, or potentially causing serious risk. And it saw the regular penalty upped tenfold to a $5,500 fine.

This piece of legislation added two new clauses to section 4B of the Inclosed Lands Act. These applied to aggravated trespass on “agricultural land”, which involves either the wilful destruction of property or the purposeful release of livestock.

An individual convicted of aggravated trespass on agricultural land is liable to up to 12 months prison time and/or a fine of $13,200. However, if the offender was in the company of two or more people, or seriously risked any person’s life, they face up to 3 years behind bars and/or a fine of $22,000.

Indeed, it’s plainly obvious that the state government is placating to the wants of two key industries – resources and animal agriculture – as they’re both sectors of the economy that are having their viability increasingly questioned as the climate emergency grows.

But rather than heeding the rising calls of activists and a growing number of the constituency, the government prefers to increase anti-protest laws and lockup perpetrators for longer periods, whilst it protects its corporate cronies from being forced into making moves to halt the crisis.

Paul Gregoire is a Sydney-based journalist and writer. He has a focus on civil rights, drug law reform, gender and Indigenous issues. Along with Sydney Criminal Lawyers®, he writes for VICE and is the former news editor at Sydney’s City Hub. View all posts by Paul Gregoire →

Just received email saying police prosecutor on longterm health leave and rhey want to vacate my editable case??? 10 days notice??? Any info?
This on one hand seems harsh, on the other hand a failure to trim sails to a real budget. No ticket, no indemnity insurance? That's a big deal also.
In relation to Community Correction Order Must Come with a Criminal Conviction Posted February 8, 2022. You referred to CCA Judge Roderick Meagher who as far as I know died in 2011. Did you intend to refer to his third cousin Anthony John Meagher who I think is also a Judge in the Court of Appeal.
You know Pell got off on Appeal don't you?