By Paul Gregoire and Ugur Nedim

Any suggested government-imposed prohibition on the public display of a particular symbol is likely to provoke responses opposing the proposition as being yet another expression of Australia’s increasing authoritarian drift.

However, according to NSW shadow counterterrorism minister Walt Secord, the proposal he recently tabled in his private members bill, which would ban the public exhibition of Nazi insignia, is needed due to rising expressions of authoritarian sympathies at the grassroots level.

“I expect that if I had stood in this chamber 50, 60 or 70 years ago and asked what the NSW parliament was doing to prevent the flying of Nazi flags, the likely answer would have been, “Who in Australia would ever display one or carry one in a public rally?” said Secord on introducing his bill.

The Labor MLC pointed to right-wing extremism having become a significant concern for ASIO, with the saluting of the Nazi flag being a cited practice.

Indeed, the chief domestic spying agency, as well as the AFP and NSW police, all report a spike in caseload targeting white nationalist groups.

Secord has moved on this issue based on a NSW Attorney General’s Department report – obtained via freedom of information laws – which found that over the two years to April 2020, 31 incidents of Nazi flags or symbols being publicly displayed had been reported to authorities. 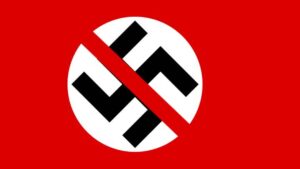 Introduced on 13 October, the Crimes Amendment (Display of Nazi Symbols) Bill 2021 seeks to create a new offence specifically aimed at curbing public expressions of Nazi insignia, in recognition that they’re designed to intimidate.

As its explanatory memorandum explains, “The object of this Bill is to prohibit the public display of a symbol of, or associated with, the National Socialist German Workers’ Party, the Third Reich or neo-Nazism… except in certain circumstances.”

The bill seeks to insert new section 93ZA into the Crimes Act 1900 (NSW), which contains the offence prohibiting the public display of a Nazi symbol, with a maximum penalty of 6 months imprisonment and/or a fine of $5,500 applying to individuals, while a guilty corporation would face a $55,000 fine.

However, the Anti-Discrimination Board NSW president would be able to grant an exemption if a public display was “to be done reasonably and in good faith for” any “academic, artistic, scientific or research purposes in the public interest” and this can extend to discussion or debate.

The section defines a Nazi symbol as any insignia associated with the Nazi Party. This includes the flag and the Hakenkreuz, or the Nazi hooked cross as it’s referred to in the bill.

The Nazi hooked cross is an adaptation of the ancient swastika. This is a religious symbol, which is rotated at a 45 degree angle when associated with the Nazi Party.

The legislation makes clear that the ban does not apply to the regular use of the swastika within the Buddhist, Hindu or Jain traditions.

During his second reading speech on the bill, Secord outlined that the ban would further apply to other Nazi symbols, such as the Schutzstaffel, the Totenkopf and sonnenrad, “as well as neo‑Nazi symbols that did not exist at the time of the Nazi Party and the Third Reich”.

While a public act of display is defined in the bill as any written or visual communication, including on social media, as well as the wearing of Nazi insignia, or the distribution of material featuring it. The law also extends to public displays on private land.

Secord outlined in parliament that while NSW already has an existing framework of laws designed to prevent racial vilification, they’re obviously not preventing the display of Nazi symbols in public.

This framework of laws includes recently introduced section 93Z of the Crimes Act, which replaced earlier anti-vilification laws that had led to no prosecutions over their 30 year lifespan.

Section 93Z makes “publicly threatening or inciting violence on grounds of race, religion, sexual orientation, gender identity or intersex or HIV/AIDS status” a crime, which carries up to 3 years inside and/or a $11,000 fine for an individual, while corporations face $550,000 fines.

The attorney general’s report further indicated that since this law came into effect in August 2018, 112 anti-Semitic incidents had been reported in NSW, including the 31 instances of displaying the Nazi flag or symbol. However, not a single charge has been laid in relation to any of these instances.

ASIO director general Mike Burgess stated in October 2020 that 30 to 40 percent of his agency’s workload over that year so far had consisted of monitoring right-wing extremism.

While last week saw the Home Affairs Department list a neo-Nazi group as a proscribed terrorist organisation for the second time since the federal government has been compiling the list.

In October, the Australian Federal Police Joint Terrorism Team announced that its caseload targeting white supremacist groups had risen by 750 percent over the 18 months prior. And this now accounts for 15 percent of its total investigative work.

NSW police commissioner Mick Fuller told an estimates hearing in September that far-right extremism has been on the rise in this state over the past five years, and this has escalated since the start of COVID. He estimated it now takes up 20 percent of his force’s counterterrorism effort.

A threat to free speech?

During his reading speech, Secord addressed concerns around encroachments upon freedom of speech and expression in relation to his proposed prohibition on Nazi symbolism in public, as he emphasised that this nation is “not pro-censorship”.

“I believe freedom of speech should not, and does not legitimately, extend to the display of Nazi symbols,” the shadow minister said, adding that the primary reason to preserve free speech is that the shutting out of what offends a society may undermine the strength of its political discourse.

Nazism is neither a movement nor an artistic expression, Secord continued, rather it’s a “fully documented political ideology” that doesn’t warrant the need for any further consideration in this country.

The Labor MLC noted at several points during his speech that Nazi ideology had led to the murder of 6 million Jewish people, including 1.5 million children.

“It is, in fact, a political ideology that Australian society has previously examined, considered, opposed, gone to war against and defeated,” Secord concluded on this point.

“Let us be crystal clear that Nazism is a manifesto that Australia has already litigated and discarded.”

I am curious as to what the minimum sentence would be for her. I've already "heard" the maximum. I truly hope your country punishes her. Shes dangerous not to mention an awful human being. Sadly your country may be the only ones in a position to truly punish her.
What is the statute of limitations on this crime? Specifically for Amber Heard attacking Johnny Depp when she cut off his finger? As well as deliberately burned his face when she ground a lit cigarette into his face?
Over 3 thousand dollars was taken from me due to robodebt. Taken! In 2015! It's now 2022... and I'm yet to be informed of how much I'm even receiving... I heard the maximum we will receive is $400? What a joke! If I owed the government money and it was a $3,000 debt from 2015, I assure you, I'd be liable to pay a lot more than just $400! We've been told constantly it will be by a certain date then the date changes.. some people have been incarcerated for not paying government debts! Tell me, where's the justice there!?
Received notice of fine and 10 demerit (phone use on ph) so now I'm on 13 points. I have paid the fine on 26/5 .. but haven't received suspension notice yet. How long does it take to receive? Worried it might have got lost in post and am driving without licence