By Paul Gregoire and Ugur Nedim

The arrest of YouTube channel Friendlyjordies producer Kristo Langker has raised widespread condemnation for what many are asserting was a politically motivated act of police overreach on the part of plainclothes officers.

Three detectives from the NSW Police Fixated Persons Investigations Unit showed up at Langker’s front door to arrest him on 4 June over the alleged stalking of NSW deputy premier John Barilaro, who incidentally happens to be suing the producer’s employer, Jordan Shanks, for defamation.

Political satirist Shanks has long been providing a biting appraisal of Australian politics, which resulted in Barilaro filing proceedings against him in late May this year, over two video clips the politician claims the commentator accused him of corruption.

In relation to two incidents where Langker approached Barilaro whilst filming for future public perusal, the plain clothes detectives apprehended the 21-year-old at his family’s Dulwich Hill home at 5 pm on a Friday afternoon, wrestled him to the ground, handcuffed him and led him away.

The Langker family claims the detectives assaulted Kristo’s mother during the arrest and almost killed their elderly dog.

“You can’t just do this in Australia… take someone out of their house,” Kristo’s father can be heard calling out to detectives as they lead his son away and place him in an unmarked police car. 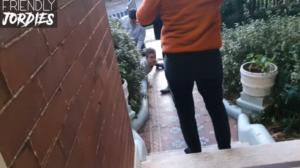 With intent to cause fear

Langker was charged with two counts of stalking or intimidation with intent to cause fear of physical or mental harm contrary to section 13 of the Crimes (Domestic and Personal Violence) Act 2007 (NSW).

The offence carries a maximum penalty of 5 years imprisonment and/or a $5,500 fine.

The police papers allege that the initial incident that was intended to cause the NSW deputy premier to fear physical or mental harm occurred when Shanks and Langker approached Barilaro at a Macquarie University politics in the pub event on 19 April.

The pair approached the politician, questioning him as to why he was planning to sue for defamation. After Shanks left the scene, Langker is said to have persisted with his taunting.

The second incident occurred on 4 June at around 12.30 pm, when, according to Shanks, Langker was leaving university and happened upon Barilaro getting into a car.

Langker took the opportunity to approach the NSW Nationals leader to question him about an issue with the lawsuit document they’d received. The problem was it stated Barilaro’s address was Parliament House in Canberra, therefore making it officially void.

As Langker attempted to hand the document back to Barilaro who was on the phone, the politician ignored him and got into the vehicle, which drove away.

However, less than five hours later, a team of fixated persons unit detectives arrived at the producer’s family home to drag him away.

As one of his first initiatives as the state’s top cop, NSW police commissioner Mick Fuller launched the NSW Police Fixated Persons Investigations Unit on 1 May 2017.

The move was linked to the 2014 Lindt Café siege but came prior to the release of the NSW Coroner’s report into the incident.

The unit aims to identify and disrupt lone actors who become obsessed with public figures to the point that they may seek to do them harm. It was designed to complement the NSW Counter Terrorism Command, in terms of capturing those whose behaviour doesn’t constitute terrorism.

As NSW police was establishing the unit, it said it had around 50 people on its radar who could potentially be targeted, including a man who’d been shouting antiwar slogans during a minute’s silence at an Anzac Day commemoration at Martin Place.

By August 2019, the fixated persons unit was said to have completed 100 investigations, which had led to the arrest of 40 people and the seizure of 31 firearms.

But questions are being asked as to how Langker became the focus of police detectives charged with tracking down potentially dangerous persons, over his having approached Barilaro in a tongue-in-cheek manner in public, whilst recording the interactions to share freely with the wider community.

After being charged and questioned at Newtown police station, Langker was released on bail with some peculiar accompanying conditions.

The political comedy producer could have his bail revoked and end up in prison if he was to approach Barilaro or attempt to contact him unless it is through a lawyer. He’s banned from going within 200 metres of any place where the deputy premier works or resides.

Langker is further not allowed to possess or share any images or caricatures of Barilaro, nor can he comment on the behaviour or appearance of the leader of the NSW Nationals Party. And the journalist can’t participate in the publishing of any further content harassing the politician.

Langker’s lawyer Mark Davis has commented that these are the weirdest bail conditions he’s ever come across during his career in the legal profession.

To be continued in court

In a 14 June Friendlyjordies clip, Shanks points out some obvious issues with the police statement of facts that Langker was provided with on his release from custody.

The first is that Langker is said to have followed Barilaro for 200 metres prior to approaching him, while the footage shows otherwise.

The statement of facts further suggests that Langker called Barilaro “corrupt” when the video shows that he didn’t make any such comment. And the document further claims that the producer “rounded the car” after the deputy premier got inside, which didn’t seem to happen either.

Screenshots of Langker’s arrest are taken from a Friendlyjordies clip

As the Legal Sector Swells, Women Now Make Up the Majority of Australian Solicitors

NSW Drug Court Slated for Dubbo. So, How Will Its Diversionary Program Work?

Thank you for this article, the point below in particular seems to have been ignored instead focussing on whether he questioned why he is suing Jordie. "question him about an issue with the lawsuit document they’d received. The problem was it stated Barilaro’s address was Parliament House in Canberra, therefore making it officially void." However if there was to be a follow up article I would very much like to hear what legal recourse there is for being treated unfairly to this police behaviour and additionally what possible solutions there are to ensure this journalist suppresion action cannot occure again.
Can you hand in licence for 6 months whilst in rehab to get back all points
If an officer puts the wrong address of where a traffic offense has happened is the fine void???
A neighbour has made false allegations against my partner who has been arrested and currently in jail. This evening Monday 14th June 2021, this same neighbour was heard by several people saying that he lied to the police. How do I go about reporting this or do I just call the police.